By CydneyOctober 31, 2015The Rax Files
No Comments

We're only two days away from the biggest book giveaway contest on GoodReads.com. Starting November 1, sign up to win your copy of the hot, deliciously juicy new novel IF YOUR WIFE ONLY KNEW. No one can write about twisted love triangles like author Cydney Rax. If you enjoyed MY HUSBAND'S GIRLFRIEND and DESPERATE HOUSEWIFE, get ready for another compelling read. There's drama, there are unforgettable characters, and there's something new to think about when it comes to love, marriage, infidelity and complex relationships. Twenty-five lucky winners will be selected to win the book that will be the hottest novel of 2016. Click here to enter the contest (November 1 through November 30). 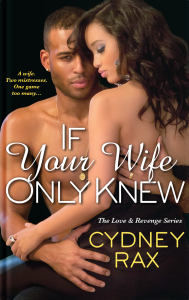